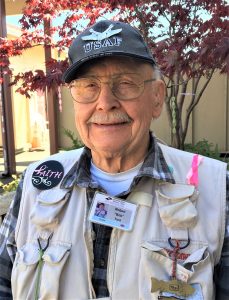 Bob Ford is a husband, father, dedicated fisherman, and Korean War veteran. Bob has respiratory problems, including COPD and asthma. For the past eight years, he has been a participant in HSRC’s Adult Day Health program.

Bob says that when he started with Adult Day Health, “I was not in very good condition emotionally, mentally, physically.  I was just a wreck.” In addition to his respiratory issues, he was depressed, addicted to mind-altering pharmaceuticals, and drinking—until two things happened. The first was 9/11, when he decided that he needed to clean up and go straight in case of another war.  The second was entering the Adult Day Health Program.  “It was a lifesaver, actually,” he says.  “It arrived at just about the right time for me.”

Bob says that when he first started at Adult Day Health, he had trouble getting along with people.  But that changed.  His social worker says, “Bob is a huge success story.  He used to isolate himself and was very wary of offending others.    He is so much more stable and social now.  He has made good friends here.”

And on Saturdays, he goes fishing.